Food aid is a resource provided on concessionary terms in the formof, or for the provision of, food. In accounting categories, international food aid is a cross-border flow that is an entry into a country’s balance of payments. National governments do provide food aid within their own borders, however. Generally, food aid is thought of as assistance provided by donor governments and humanitarian agencies to address the problems of hunger, food insufficiency, and malnutrition and indeed some food aid is expressly for this purpose. Over the history of modern food aid, however, substantial amounts of food aid have had little to do with addressing hunger.


Food assistance throughout history has included attempts to address famine in Venezuela in the 1830s, Ireland in the 1840s, and the Ukraine in the 1930s all of which involved significant shipments of food. The India Famine Codes in the late 19th century may have been the first systematic attempt to balancemarket forces and free food distribution. But the origin of large-scale contemporary food aid traces to the post World War II period in North America, when technological advances led to dramatic increases in production that resulted in significant surpluses and declining prices for farmers. Politically obligated to purchase the surpluses, the U.S. and Canadian governments found it less costly to give away the surplus food than to store it. United States Public Law 480, enacted in 1954, formalized this process.Hence the origin of modern food aid was a means of addressing domestic surplus production not a means of addressing hunger or poverty. Over the past 50 years food aid has served multiple objectives: disposing of surplus production, supporting farm income, maintaining a maritime shipping fleet, supporting domestic agribusiness and food processing industries as well as addressing hunger in foreign countries.


Classically there have been three kinds of food aid. Program food aid, for almost 40 years the largest single category, is subsidized deliveries or free grants of food on a government-togovernment basis. The recipient government usually sells the food and uses the proceeds for many purposes not necessarily for food assistance or anything to do with addressing hunger. The main purpose of program food aid has been to provide budgetary support or balance-of-payments relief for recipient governments.
Project food aid provides support to field-based projects in areas of chronic need through deliveries of food, usually on a grant basis, to a recipient government, a nongovernmental organization, or the U.N. World Food Programme. The recipient agency then uses the food either directly in projects such as mother and child health, school feeding, or food-forwork projects that provide an employment guarantee using food for wages, or by ‘‘monetizing’’ the food aid selling it in the recipient country market and using the proceeds for project activities that require cash as an input rather than food.
Emergency or humanitarian food aid consists of deliveries of free food to populations affected by conflict or disaster, with a host country government, the World Food Programme, or a nongovernmental organization acting as the distributing agency.


The total annualflowof food aid in the years 1981 through 2005was around 8 10 million metric tons a relatively tiny amount compared to themore than 300million tons of commercially traded food of the same commodity groups. Since 1980, humanitarian food aid has become themost dominant form, amounting to about 60 percent of the total, whereas prior to 1980, it was in the range of 10 15 percent. Since the beginning of the 21st century, program food aid or governmentto-government food assistance has declined sharply, and by 2007 seemed likely to be phased out altogether soon. Project food aid tended to be relatively stable in volume terms in the period 1980 2005. In the post World War II years, food aid comprised as much as 15 percent of total overseas assistance in the early 21st century, by contrast, it accounted for only 2 3 percent of the total.


International food aid has been subject to weak regulatory mechanisms, many of which are outdated or dysfunctional. As a result, many of these mechanisms were being renegotiated as of 2007, or their roles were being taken over by other, newer institutions. The Food Aid Convention originally signed in1967 and renewed in 1998 existed on one-year extensions for several years in the first decade of the 21st century, and was up for a major renegotiation by 2007. Much of the impact of food aid on trade has come up for negotiation at the World Trade Organization. 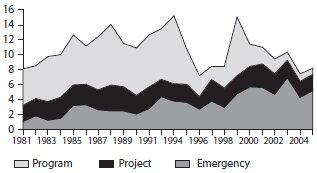 The extent to which food aid undermines international trade or local incentives for agricultural production is also a subject of controversy. Overall, there appears to be no significant impact of food aid on domestic production, but different kinds of food aid have different effects well-managed emergency food aid can actually lead to an increase in food production (with a lagged time effect, because wellmanaged emergency food aid can enable farmers to cultivate a crop when they might otherwise be unable, thus resulting in a greater harvest available at the end of the season). But poorly targeted food aid that ends up being consumed by people who would otherwise be able to grow or purchase food may undermine production or trade incentives. Open ‘‘monetization’’ (the sale of food aid in the recipient country) is thought to be one example that causes trade or production displacement.
Traditionally food aid was provided in kind by donor governments, to be used or distributed either by recipient country governments or by humanitarian agencies. Beginning in the 1990s, food aid from some donors has been ‘‘untied’’ from market sources in donor countries, meaning that a proportion of food aid budgets are now in cash for purchasing food either within the country where food aid is needed, or in a nearby developing country called local and regional purchase. European donors and Canada devote significant proportions of their funding to local or regional purchase of food, which is believed to save both time and expense when responding to acute need, thus enabling more rapid response and a relatively greater volume of response within fixed budgets. United States food aid continued to be tied to procurement in U.S. markets as of late 2007, and the extent to which ‘‘aid-tying’’ of food assistance continued to be allowed was a subject of considerable controversy in World Trade Organization negotiations over a new Agreement on Agriculture. In addition to pressure for untying food assistance, there was also considerable evidence that cash transfers are a more effective and efficient means of ensuring access by poor or disasteraffected populations to adequate food under some circumstances. See also Agreement on Agriculture; aid, international