The assignment problem concerns the allocation of policy instruments to policy targets in order to improve policy effectiveness. Policy instruments are the variables or procedures that policy authorities directly control. Policymakers’ use of these instruments to achieve objectives (i.e., policy targets) directly affects the welfare of their constituents. For example, government spending is an instrument that can be used to reduce unemployment. Assignment is important because in actual policymaking, competing government agencies can be given different instruments. The question then becomes which is the appropriate allocation? Assignment problem was analyzed by many scholars. Even there were researches on this topic on https://place-4-papers.com/write-my-nursing-concept-map/
Trevor Swan (1960) noted the problem in the context of an open economywhere the two objectives were full employment with price stability and a reasonable current account deficit (CAD) of the balance of payments. The first is the objective of internal balance and the second that of external balance, which is an essential part of participating in theworld economy. External imbalances in one country can lead to imbalances for others with which it transacts. One country’s delays and inefficiencies in achieving balance impinge on others, and when the country is large, can have repercussions for the global financial system.


In 1952, Jan Tinbergen demonstrated that to achieve policy objectives, governments must have policy instruments equal in number to the objectives. According to what is known as the Tinbergen rule, a government cannot achieve two objectives with just one instrument. If a country has unemployment and a CAD, for example, and the only instrument available is government spending, it can fix only one problem(Meade 1951). If the government spends more to stimulate the economy, it will lower unemployment but worsen the disequilibrium in the balance of payments as overall output and imports rise. If it reduces spending, the balance of trade improves, but unemployment rises.One objective is attained at the expense of the other. If the government uses two instruments government spending and exchange rate policy to achieve its objectives, the question is one of appropriate assignment: which instrument should it assign to control demand, output, and employment, and which to achieve trade balance?

Adjustment in the Swan Diagram


Swan (1960) showed that an incorrect assignment can move the economy away fromfull equilibrium. Figure 1 shows a simple Swan diagramwhere the internal balance, or domestic market equilibrium schedule, IBf is downward sloping in the space of real exchange rate Z and absorption, or domestic demand, A. Z is the ratio of external to domestic costs of production. Currency appreciation reduces demand for domestic goods so that government spending, a component of absorption, has to rise to maintain output unchanged. The external balance, or balance of payments equilibrium schedule, EB, is upward sloping. The current account will improve with real depreciation as imports fall and exports rise, so government spendingmust be raised to restore imports and prevent the balance of payments going into surplus. The four quadrants denote different types of disequilibria. Only at thepointof intersectionof the two schedules are the two instruments such that both the targets are achieved. Output is demand determined below the full employment IBf schedule and otherwise limited by the factor of production labor. 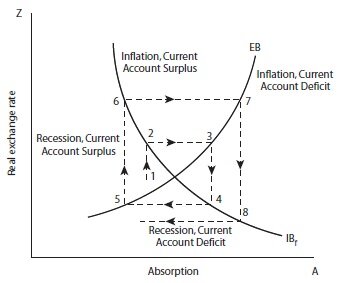 Assignment in the Swan diagram


Each policy instrument should be assigned to the target variable on which its relative effect is higher. Robert Mundell first formally stated this in 1962 as the principle of effectivemarket classification. Consider a case where the two policy instruments are the interest rate and the budget deficit, with a fixed exchange rate. If the rate of interest has a larger effect on external balance, Mundell showed that the interest rate must be assigned to external balance and the budget deficit to internal balance in sequential adjustment; otherwise the economy will diverge fromfull equilibrium. The interest rate affects both the current and the capital account. Suppose government expenditure and interest rates rise, moving away from the unique equilibrium, but with internal balance satisfied. The rise in government expenditure tends to raise income, but the rise in interest rate reduces it, so that income remains at the full employment level. Since output is unchanged, the trade balance is unchanged as well, assuming exports are constant and imports depend only on income. But the rise in interest rates improves the capital account of the balance of payments, so that the balance of payments is now in surplus. Therefore the internal balance schedule must be steeper than the external balance schedule.
Starting from a position with recession and a CAD, if the government reduces spending to reduce the CAD, it will improve the CAD but worsen the recession. If it then decreases the interest rate to stimulate output, itwillworsen the capital account as capital flows out, resulting in cumulativemovements away fromequilibrium. Adjustment converges to the full equilibrium if the opposite assignment is made. That is, the interest rate is directed to achieve external equilibrium and government spending to achieve internal equilibrium each policy instrument is assigned to the target onwhich it has the greatest effect, or which it has a comparative advantage in achieving. In this simple model with fixed exchange rates, the implication is that monetary policy or the central bank should target external balance, while fiscal tax-expenditure decisions target full employment.
In practice, sequential policy adjustment is difficult since the economic system is simultaneous. In both models, since the full equilibrium is stable, it is attained with simultaneous adjustment of both instruments. Markets themselves also generate adjustment in response to disequilibrium. But optimal assignment is a useful feature to keep in mind when making a complex policy decision, especially if the two instruments are the responsibility of different institutions. The correct allocation of separate instruments to separate authorities may allow more efficient adjustment. In addition, since all models are a simplification of a complex reality, as international and domestic institutions change, the relevant model also changes or must be suitably adapted.


In the simple deterministic models considered so far, there were no random shocks. Poole (1970) has an interesting variant of the assignment problem regarding the choice of the appropriate instrument for monetary policy. He showed that if aggregate demandwas subject tomore randomshocks compared to the demand formoney, money supply should be the operating instrument. Output fluctuations would then be lower, since procyclical interest rate movements would moderate the shocks. If the intensity of shocks to money demand was greater, interest rates should be the instrument, since automatic adjustment of money supply would smooth interest rates, reducing output fluctuations. The opposite assignment would magnify the impact of fluctuations. See also balance of payments; comparative advantage; discipline; exchange rate regimes; expenditure changing and expenditure switching; money supply; Mundell-Fleming model; structural adjustment; Swan diagram; twin deficits
Categories: Concepts and Principles
Related links: