The concept of competitive advantage came into popular usage in the 1980s as an attempt to identify and define the strategic goals of the firm. In his now famous work Competitive Advantage: Creating and Sustaining Superior Performance, Michael Porter showed that the goal of all firms is to achieve a competitive advantage in relation to their rivals. This they do either by selling at a lower cost/price or by differentiating their product fromthose of their rivals (Porter 1985). Cost and differentiation advantages are frequently referred to as ‘‘positional advantages,’’ as they determine the firm’s position in an industry, such as whether it competes in the broad, mass market or a segment/niche. A competitive advantage enables a firm to earn profits that are higher than the average profit earned by competitors (‘‘excess profits’’). A sustainable competitive advantage is one that cannot be duplicated or imitated by other firms that may enter the industry in the long run and compete for the excess profits enjoyed by existing firms. For example, a firm may acquire a sustainable advantage through the creation of a brand name that comes to be associatedwith quality or ‘‘value formoney’’ and is difficult for other firms to replicate.The St.Michael’s label has enabled the British retailer Marks and Spencer to establish a reputation of this kind in the clothing and food retailing industry.

Firms acquire a competitive advantage by creatingmore value than their competitors in the value chain.The latter is the system of activities (both primary and support activities) that the firm undertakes in the process of value creation.As goods pass through the value chain, value is created at each stage, fromupstreamsuppliers to downstream sales and marketing outlets. Equally important is the contribution made by nonproduction activities such as research and development (R&D) andmanagement services. In this process, an important decision is how to configure each of the activities within the value chain and how to coordinate these activities.Configuration refers to decisions about where to locate each particular activity and how many locations to have for each activity. Coordination relates to the decisions about how to link together the same activity performed in different locations and how to coordinate that activity with other activities in the value chain.

In a later work titled The Competitive Advantage of Nations, Porter introduced the notion of national competitive advantage to refer to ‘‘the decisive characteristics of a nation that allow its firms to create and sustain competitive advantage in particular fields’’ (Porter 1990, 18). Such a concept must be distinguished from the concept of comparative advantage used in classical trade theory to refer to the relative cost advantage that a nation enjoyswhen entering into trade with another country. In classical trade theory, such an advantage was measured in terms of the relative amounts of labor time that producers in different countries required to produce different goods. Later, neoclassical trade theorists explained such differences in terms of factor endowments and the different factor proportions required to produce different goods.While recognizing the usefulness of the concept of comparative advantage for explaining patterns of trade, Porter called for a ‘‘new paradigm’’ based on competitive advantage.
Porter argued that what matters when determining why a particular nation succeeds in a particular industry is the competitive environment of the nation, as this shapes the success of the firms based in that country. This is determined by a number of factors, including the following:

Traditionally, these factors are represented by the ‘‘diamond’’ diagram shown in figure 1. In addition to these four factors shaping the competitive environment of a country, Porter emphasized the importance of two other factors that may separately contribute to a country’s acquiring a competitive advantage or prevent its doing so. The first is the role played by chance events, such as an invention, shortages of key inputs, a sudden rise in the costs of inputs, significant shifts in exchange rates, wars, or the political decisions of government. The second is the role of government policy, which may influence firms in a particular industry either positively or negatively.The extent to which government intervention has contributed to the emergence of a national competitive advantage in particular countries is hotly debated. Advocates of government intervention point to the experiences of Japan and Korea as examples of how such intervention can work.By contrast, the same policy largely failedwhen applied byWest European governments to Europe’s electronics industry. Government intervention is viewed by Porter as working through the four main determinants of the diamond rather than constituting a fifth factor. 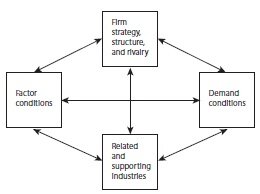 Porter’s diamond Figure 1
An important aspect of the phenomenon of national competitive advantage is that it is an evolving process, in which all the factors interact, with each determinant influencing the others. This process of interaction is as important as the presence or absence of each of the factors viewed separately. Thus factor conditions at any given time are determined by factor creation in the form of investment in education and infrastructure and, more important, investment in the creation and upgrading of advanced and specialized factors such as science and technology. Such investment is stimulated by a strong element of rivalry between domestic firms.Demand conditions are also affected by the existence of intense rivalry, which helps create a large domestic demand for the product through investment in marketing, aggressive pricing policies, and the introduction of more varieties of the same product. The development of related and supporting industries is affected by all of the other factors, as is the degree of domestic rivalry among firms.

One of the major criticisms leveled at Porter’s model is that it fails to adequately address the role of multinational enterprises in the determination of national competitive advantage. In 1993, John Dunning argued that Porter was mistaken in arguing that the firmspecific advantages of multinational companies could be explained purely and simply in terms of the competitive advantages of their home countries (Dunning 1993). Multinational companies derive their advantage from the national diamond existing in a number of countries, not just the home country. If Porter’s model is to be applied to international business, Alan Rugman has argued that a ‘‘multiple diamond’’ approach is needed (see Rugman and Verbeke 2001). The weakness of the Porter model, argue Rugman and Verbeke, is that it concentrates entirely on what they call ‘‘non-location-bound’’ firm-specific advantages that are developed by firms in home countries before they engage in foreign direct investment (FDI) and which can then be transferred to other branches of the firm. This ignores, however, the advantages that multinational companies, which have already engaged in FDI, enjoy from having value-added activities in several locations and from their common governance. Some of these advantages are ‘‘location bound,’’ which means that they derive from a particular geographical area and cannot easily be transferred abroad.
The need for such amultiple diamond approach is especially relevant in the case of small countries, where firms are able to overcome the problems of a small domesticmarket by increasing their sales in the markets of other countries. Rugman and Collinson have illustrated how the Porter model could be applied to the analysis of the problem of international competitiveness with reference to firms in Canada (Rugman and Collinson 2006). Using a double diamond model, Rugman and Collinson show how Canadian firms have used exports to the United States and their rivalry with U.S. firms to develop a global competitive advantage in particular industries. In effect, the Canadian and U.S. markets served as two domestic markets through which Canadian firms could become globally competitive. Such an advantage may be acquired through developing new innovative products and services for consumers in both markets, drawing on support industries and infrastructures in both countries, and making freer and fuller use of the physical and human resources of both countries (Rugman and Collinson 2006).

One of the effects of the focus on competitive advantage since the 1980s has been an increased fascination with competitiveness rankings of countries.Two examples of this are theGlobal Competitiveness Report by the World Economic Forum (WEF), and the World Competitiveness Center’s Yearbook. Such listings seek to rank countries in terms of competitiveness using a range of criteria such as economic performance, government efficiency, business efficiency, and infrastructure. The 2006 rankings of the WEF placed Switzerland, Sweden, and Finland respectively in the top three places in the world. It should be pointed out, however, that it is comparative, not competitive, advantage that determines what goods a country specializes in. This is because trade is a positive-sumgame in which all countries gain, not a zero-sumgame in which one country gains only at the expense of another.
This point is well made by Paul Krugman in a short essay first written in 1994, in which he comments on what he called the ‘‘dangerous obsession’’ with competitiveness (Krugman 1996). Using the example of Japan achieving a higher level of productivity than the United States, Krugman writes, ‘‘While competitive problems could arise in principle, as a practical, empirical matter, the major nations of the world are not to any significant degree in economic competition with each other. Of course, there is always a rivalry for status and power countries that grow faster will see their political rank rise. So it is always interesting to compare countries. But asserting that Japanese growth diminishes US status is very different from stating that it reduces the US standard of living and it is the latter that the rhetoric of competitiveness asserts’’ (Krugman 1996, 10).
Achieving a national competitive advantage is important in enabling some countries to grow faster than others. An obsession with competitiveness, however, is dangerous, as Krugman argues, because it can lead toprotectionismand trade conflict, aswell as misguided public spending designed to create and sustain a national competitive advantage over other trading partners and the promotion of national champions.
To summarize, acquiring and sustaining a competitive advantage can be seen as the primary strategic aim of firms in the modern world economy. The source of national competitive advantage is to be found in the competitive advantage obtained by the firms operating in the country, both domestically owned and foreign owned. This, in turn, is the product of a complex set of factors that interact with one another to shape the competitive environment of the country. Unlike comparative advantage, however, competitive advantage is a dynamic concept, in which national competitive advantage continuously evolves. In a world in which multinationals are dominant, the source of such advantage often results from firms operating in more than one country. Despite its usefulness in explaining why some countries develop a specialization in a particular industry or branch, an emphasis on attaining a competitive advantage can cause governments to pursue misguided policies that lead to trade conflict. It remains the case that trade is a positive-sum game in which all can benefit. See also commodity chains; comparative advantage; foreign direct investment (FDI); foreign direct investment: the OLI framework; New Economic Geography
Categories: Concepts and Principles
Related links: