A balance of payments is an international accounting record. It records the economic transactions of the residents of one country with the residents of other countries during a fixed period (month, quarter, year). The payments are usually measured in a country’s home currency, although the accounts are sometimes expressed in U.S. dollars to facilitate cross-country comparisons. The payments are broken down into categories goods, services, transfers, investments, and official reserves. Inflows and outflows in each category are measured and a net figure for each is calculated. Strictly speaking, each category has a balance and, as a matter of practice, several balances are regularly reported by government agencies and the financial press. The balance of payments is a generic termthat refers to payment flows in some or all of the different categories.
Although balance of payments accounts are constructed using sophisticated accounting principles, including double-entry bookkeeping, a country’s cross-border transactions are not measured with the accuracy of a corporation’s accounts. Balance of payments figures are statistically estimated based on sampling data gathered by government agencies. In the United States, business firms are required by law to provide information on international transactions. The Office of Management and Budget, the Customs Service, the Department of Commerce, and the Treasury Department gather or compile such information. Although these agencies do their utmost to provide reliable estimates, of necessity the accounts contain errors; the statistical estimates are based on data that are incomplete and otherwise imperfect.


The interest in international transactions goes back to at least the 14th century. The mercantilists, a group of British writers, urged government policies that encouraged exports and discouraged imports. They argued that a surplus of exports over imports would preserve the country’s specie (metallic money supply) and enhance the wealth of the country. Borrowing the idea of an accounting balance from the double-entry bookkeeping of Italian merchants, the mercantilists introduced the term balance of trade into economic discussion in the 1600s. In the 18th century, David Hume pointed out that a country cannot run a permanent trade surplus (his famous price-specie flow mechanism), and AdamSmith roundly criticized themercantilists for conflating money and wealth. The balance of payments received a great deal of theoretical attention in Britain’s 19th-century monetary debates; the effects of fiduciary media (papermoney) on the trade balance were especially controversial. European and U.S. governments collected international trade statistics in the 19th and early 20th centuries, but the modern system of payments accounting was not established until the end of World War II, when agreements at Bretton Woods empowered the International Monetary Fund (IMF) to gather and organize international trade data. World leaders recognized that the breakdown of the international trading systemduring the 1930s had exacerbated the Great Depression. They hoped that systematic gathering and presentation of trade data would enhance international cooperation.


All international economic transactions are divided into two main accounts the current account and the awkwardly named capital and financial account.


The current account is broken down into four categories goods, services, income, and transfers. Goods are the tangible items agricultural products, manufactured goods, and commodities such as copper and crude oil that are traded across borders. For most countries, goods are the main component of the current account. In 2004, the United States exported slightly more than $800 billion in goods, about 50 percent of current account credits for the year. Japan exported $539 billion in goods, about 70 percent of its current account credits (see table 1). Services are the exchange of intangibles across borders. Travel, transportation, royalties and license fees, and financial (banking, investment, insurance) and military services are the main ones traded across borders. In 2004, theUnited States exported $340 billion in services, Japan $98 billion. Business and personal travel is an important component of services in many countries; $74 billion, or 21 percent, of U.S. service export revenue came from travel in 2004. Income in the current account is primarily the dividends and interest paid to residents of a country from their investments abroad. The income can result froma resident in one country holding securities in foreign companies or governments, or from interest earned on loans to residents of other countries.For a country that invests large sums abroad but discourages foreign investment into the country, inflows of income outweigh the outflows by a largemargin inJapan’s case, $113 billion to $27 billion in 2004. Besides income from investments abroad, the income account also includes compensation to temporary workers, such as seasonal farmworkers and short-term business consultants. Compared to investment income,employee compensation is small for most countries; in 2004, the United States, for example, paid $9 billion to temporary workers from other countries, but $340 billion in interest and dividends to foreign investors.
The final item in the current account is unilateral transfers. The main items in this account are foreign aid (government grants of cash, food, clothing, etc. to the residents of other countries), charity (private donations to residents of other countries), and worker remittances (money sent home by workers employed abroad). Residents of wealthy economies usually spend considerable sums on government aid and charitable activities aimed at helping residents of other countries. In 2004, the residents of the United States disbursed foreign aid of $30 billion, private charitable contributions of $39 billion, and worker remittances of $30 billion to other countries. Residents of developing countries are usually net recipients of aid, charity, and remittances. 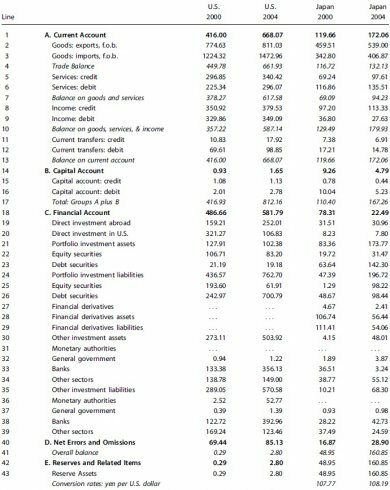 
Like the current account, the financial account is divided into four main kinds of transactions. The first of these is direct investment. Whenever residents in one country make an investment abroad that gives them a ‘‘substantial voice’’ in management, the investment is considered direct. A firmmay do this by investing in plant and equipment or by purchasing enough stock (10 percent or more of outstanding shares) to influence the managerial decisions of an existing firm. In 2004, U.S. investors spent $252 billion on direct investments abroad, $176 billion of which was reinvested earnings. Foreign investors spent $106 billion on direct investment in the United States, $56 billion of which was reinvested earnings.
The second kind of investment transaction is portfolio investment, which is the purchase of bonds and equities in one country by residents of another. Although equities are issuedmainly by private firms, bonds are issued by both firms and governments, so portfolio investment includes the purchase of government bonds by residents of other countries. In 2004, foreign residents invested $62 billion in U.S. equities and $701 billion in U.S. bonds, $458 billion of which was government bonds. By way of contrast, foreign residents invested $197 billion in Japan. The investment was split evenly, with $98 billion going into equities and $98 billion into bonds, of which $53 billionwas government bonds. The government absorbed 60 percent of portfolio investment in the United States, compared to 27 percent absorbed by the Japanese government.
A third category of investment is a residual, named ‘‘other’’ in the accounts, which includes trade credit, bank loans and deposits, and currency exchanges. In 2004, foreign residents increased their residual investments in the United States by $570 billion, $407 billion ofwhich represented an increase in the holdings of U.S. currency and bank deposits. In Japan, the pattern was rather different. Foreign residents increased borrowing from Japanese firms and government agencies by $81 billion but reduced their holdings of the yen by $13 billion, so residual investment increased by $68 billion.
The fourth category of investment in the financial account is reserve assets, which are funds available to monetary authorities to finance payment deficits. Central banks and treasuries use gold, holdings with the IMF, and foreign exchange (currencies and deposits) for such financing. In 2004, monetary authorities in the United States financed an overall deficit of $2.8 billion, mainly by altering its reserve position within the IMF. Japan had an overall surplus of $161 billion, with which it acquired foreign exchange (i.e., international reserves).


Ifwe accurately record all of the flows of payments between countries, they will always balance. Yet policymakers and others are often concerned with payment imbalances. Imbalances occur when we consider only particular types of transactions within the accounts, rather than all transactions. For example, if we consider only merchandise transactions, the resulting balance is officially called the balance on goods and is reported in the press as the trade balance. The trade balance for the United States, shown in line 4,was a negative $662 billion in 2004, while Japan’s was a positive $132 billion. Although goods are usually the biggest item in a country’s current account, services have become increasingly important. In 2004, the United States exported $340 billion and imported $296 billion in services. The United States’ balance in services was a positive $44 billion,while Japan’s was a negative $38 billion. The press does not usually report the services balance by itself, however. Instead, it reports the balance on goods and services, which for 2004 was negative $618 billion for the United States and positive $94 billion for Japan. This balance is particularly important, because it enters the national income accounts of each nation.
The gross domestic product of a country, measured in expenditures, equals consumption plus investment plus government expenditures plus exports minus imports, or Y = C + I + G + (X - M). In this equation, X - M is the balance on goods and services. Since U.S. residents spent more on imports than foreign residents spent on U.S. exports in 2004, the balanceongoods and services subtracted fromthe gross domestic output of the United States. Ifwe add to the balance on goods and services the balance on income and the balance on unilateral transfers, neither of which is widely reported, we get the current account balance, which is closely watched by policymakers. If this balance is negative, it means that a country’s current transactions are being financed by investment from abroad (or from official reserves). There is nothing wrong or even worrisome in this, as long as the investment is being used for productive purposes. If the investmentdoes not produce a higher future income, however, then its repayment will lower a country’s future standard of living.
Another balance closely watched is the overall balance. This is the sum of all current and financial account transactions, adjusted for errors and omissions, except for official reserve transactions, and is shown on line 41 of table 1. A negative overall balance means that a country is balancing its payments by draining its official reserves. If a country does not balance its current account deficit with a financial account surplus, or if it does not balance a financial account deficit with a current account surplus, then it must make up the difference by using its accumulated reserves. Governments will often use their reserves to balance the overall account over short periods, but they can do so only until their reserves are depleted. A large and persistent deficit in the overall balance indicates that a country’s trade and financial policies are not sustainable.


A country’s balance of payments results from a large number of diverse transactions, conditions, events, and policies. Natural resources (copper in Zambia, oil in Saudi Arabia), comparative advantage (automobiles in Japan), entrepreneurial discovery (the computer industry in the United States), as well as exchange rates, interest rates, income levels and growth, savings rates, political stability, wars, tariffs, and subsidies all affect a country’s balance of payments. Moreover, these influences affect different accounts in different ways, and they can operate at different speeds. Typically, economists and policymakers focus on only a few of the more important influences, among which are monetary and fiscal policies. Even within this restricted set of policies, the effects on the balance of payments are complicated. The effects of fiscal and monetary policies on a country’s balance of payments will depend on its other policies especially toward exchange rates and capital flows and on the size and wealth of the country and the extent towhich it trades with others. See also aid, international; Bretton Woods system; convertibility; foreign direct investment (FDI); gold standard, international; International Monetary Fund (IMF); international reserves; mercantilism; money supply; Mundell- Fleming model; remittances; World Trade Organization