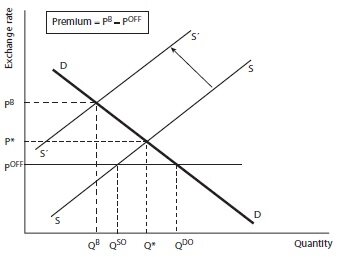 In figure 1, schedule DD reflects demand for foreign exchange, while schedule SS reflects the supply. Under normal circumstances DD will be downward sloping,meaning thatdemand for foreign exchange will be greater as the price (in units of domestic currency) declines. Similarly, SS will slope upward, since additional foreign currency will be supplied to the market only as the price (in units of local currency per unit of foreign currency) increases. Provided normal economic conditions prevail, the market can be expected to clear at price P*, where the supply and demand schedules intersect. At this price, quantity Q* of foreign exchange will be bought and sold.
When a nation fixes its exchange rate at a nonmarket- clearing rate, the normalmarket mechanism is disrupted. At the official exchange rate, POFF, demand for foreign exchange, QDO, exceeds the available supply, QSO. Those wishing to purchase foreign exchange cannot obtain it at the official price in the commercial market. If they seek to obtain foreign exchange froma private source, rather than using the queuing mechanism established by the authorities, theywill need to paymore than the official price.The margin will reflect the scarcity value of the foreign exchange, plus a premium to compensate sellers for participating in an illegal (‘‘black’’) market. This risk can be depicted by a leftward (upward) shift in the supply curve to S0S0, making the market-clearing exchange rate, PB, likely to exceed the clearing rate in a legal market. The difference between the clearing rate in the illegal market, PB, and the official exchange rate, POFF, is the black market premium. 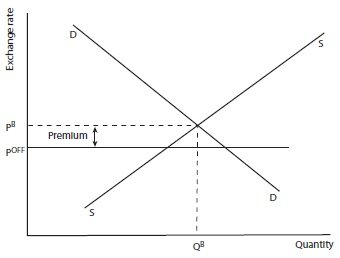 In the second case, represented by figure 2, the premium arises because sales and purchases of foreign exchange for the specific activity are illegal. In this case, shadow demand and supply schedules, depicted by the lines DD and SS, occur. The difference between the clearing price in this market, again called PB, and the official exchange rate will represent a black market premium. The size of this premium may differ from that in the previous case, depending on howthe lawaffects the demand for and supply of foreign exchange for the restricted purpose. If the activity itself is illegal for example, seeking foreign exchange to buy illegal drugs risks for the buyermay drive down the price somewhat relative to the case where only the seller faces risks. If the restriction exists alongside a market-clearing exchange regime for legal transactions, however, the opportunities for sellers to earn normal profits in the legal market may reduce the supply, and thus raise the price and the size of the black market premium, relative to what would prevail in the previous case of an official rate that is not market-clearing (figure 1).
Whichever situation applies, a black market premium signals a significant imperfection in the exchange market. This, in turn, typically has adverse implications for economic performance. Research has shown that countries with significant black market premiums tend, on average, to have lower rates of economic growth (Fischer 1993). Exchange market imperfections make it hard for foreign exchange to flow to themost productive activities, thus impairing the allocation of resources. In addition, when an overvalued exchange rate is the cause of the problem, firms and individuals must expend additional resources in obtaining foreign exchange. Thus economists typically advocate removing whatever restrictionsmay be leading to the emergence of black markets in foreign exchange. See also convertibility; dual exchange rate; exchange rate regimes; foreign exchange intervention; peso problem